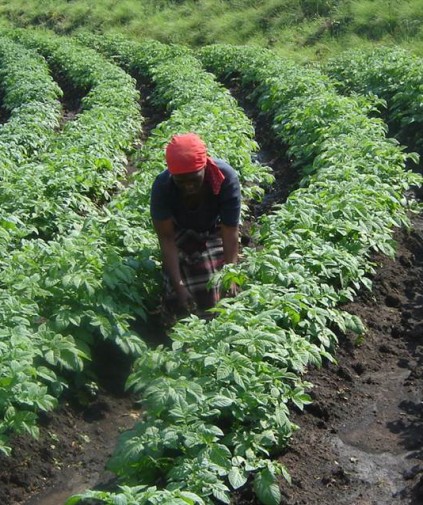 Lesotho is a landlocked country and enclave, completely surrounded by its only neighbouring country, South Africa. It is just over 30,000 km² in size and has a population slightly over two million.

Country Crest is involved with the Temo Moho project work, which was brought to the company’s attention by Fingal Dublin Chamber and the Lesotho Embassy in Dublin, in 2010. Temo Moho is a large community consisting of 2,000 small farmers growing potatoes, maize and sorgum.

Food security is a huge issue in Lesotho with an emphasis on achieving self-sufficiency, particularly in crops such as maize, which plays a vital role in feeding the nation. Country Crest is helping to develop a sustainable vegetable growing project and seed potato production. The latter is taking place in the highland areas and is seen as a unique way of encouraging the local farming industry to diversify from the current cropping structure and, ultimately, to put wealth into the local area. The aim of the Country Crest project is to enable local villages in the Temo Moho area to grow and sell certified seed potatoes to other potato producers for ware production in the lowlands and for export.

Country Crest, with the help of local growers in north County Dublin, has recently sent a container of vegetable plant propagation equipment, compost and tools to a small vegetable growing co-operative in Lesotho, which will help these growers plan their cropping programmes to meet their customers’ needs. We have also brought some trainee growers from Lesotho to train on our north County Dublin farms, during both the sowing and harvesting periods.

Country Crest Commercial Manager, Tony Doyle, is the primary representative for this project, and has been to visit Lesotho to launch and manage this project on the ground.

The scale of the project is confined to rural small farm development, typically two to four acre farms and Country Crest has committed to a minimum 5 – 10 year involvement in this project.