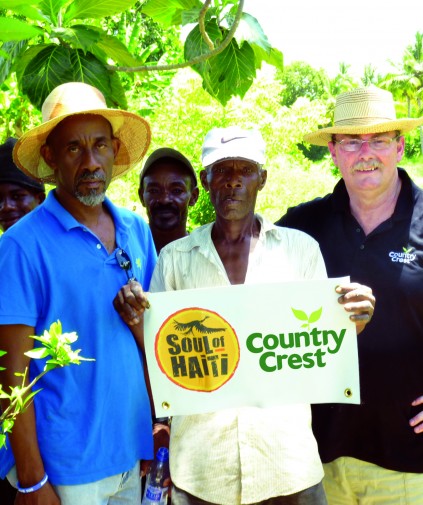 Christine is an agricultural area located near the towns of Cavaillion and Les Cayes on the island of Haiti. Christine is an agricultural growing area of approximately 2500ha which, over the past 20-30 years, has gone from a strong sugar cane and tomato production area back to basic subsistence farming. This has been caused by the lack of investment of any kind in the local infrastructure or agricultural economy. Making the jump from subsistence farming to becoming a viable farm is possible given the right commitment, expertise and capital investment.

The Christine Valley Model Farm project has a 10 year project time scale, having been launched initially in 2008. This project came about due to the 2007/2008 Ernst and Young Entrepreneur of the Year scheme. Michael Hoey, of Country Crest, was a finalist and part of a team of businesses that was invited to visit the impoverished Caribbean country of Haiti with a mission to find a business approach which would solve developmental problems. A project was then engineered, in conjunction with Soul of Haiti Foundation, based on Country Crest’s areas of expertise. A small developmental farm was set up where agricultural equipment, technology and expertise were supplied directly by Country Crest to enable native farmers to grow vegetables and bring them to market.

Country Crest has invested heavily in personnel and equipment. The initial budget for the programme in Year 1 was €100,000. The budget for the next five years was €500,000, with much of this raised through Country Crest, Soul of Haiti, Digicel, The Kellogg’s Foundation and The Clinton Global Initiative, via corporate donations. Country Crest has also provided two containers of farm machinery and equipment to the project, containing tractors and soil tilling and sowing equipment as well as sufficient spare parts. In addition, Country Crest continues to provide personnel to provide onsite training for the safe use and mechanical operation of the equipment provided.

Tony Doyle, Country Crest Commercial Manager, has been the active company representative for this project and visits Haiti on an on-going basis to manage the project execution and delivery. The primary aim of this model farm project is to educate the local population, enabling them to grow food in a sustainable, secure and economically stimulating manner. Country Crest has employed local agronomists and local university graduates to maintain and manage the farm unit so that the whole community is fully involved and empowered to make their own decisions, thereby allowing Country Crest to observe their progress and offer guidance when required.

Christine Valley Model Farm covers 18 hectares of developed farm land, encompassing all aspects of food production. This farm project, at its most basic level, provides directly for 40 local families through employment and related farm activities, and indirectly hundreds of others in surrounding communities via the economic benefits of the safe and sustainable sale of the food produced from the farm.

After the devastation caused by Hurricane Sandy in 2012, the project is back on course to meet its targets. The results from the project at present are very successful: the farm is now growing and marketing bell peppers, chili peppers, tomatoes, water melons, cabbage, carrots and maize. As a result, farmers are earning money for their produce and are able to reinvest back into the farm and the community.